You can find the program for the conference and all slides and videos here, and day-one notes here.

observations from looking at old techniques 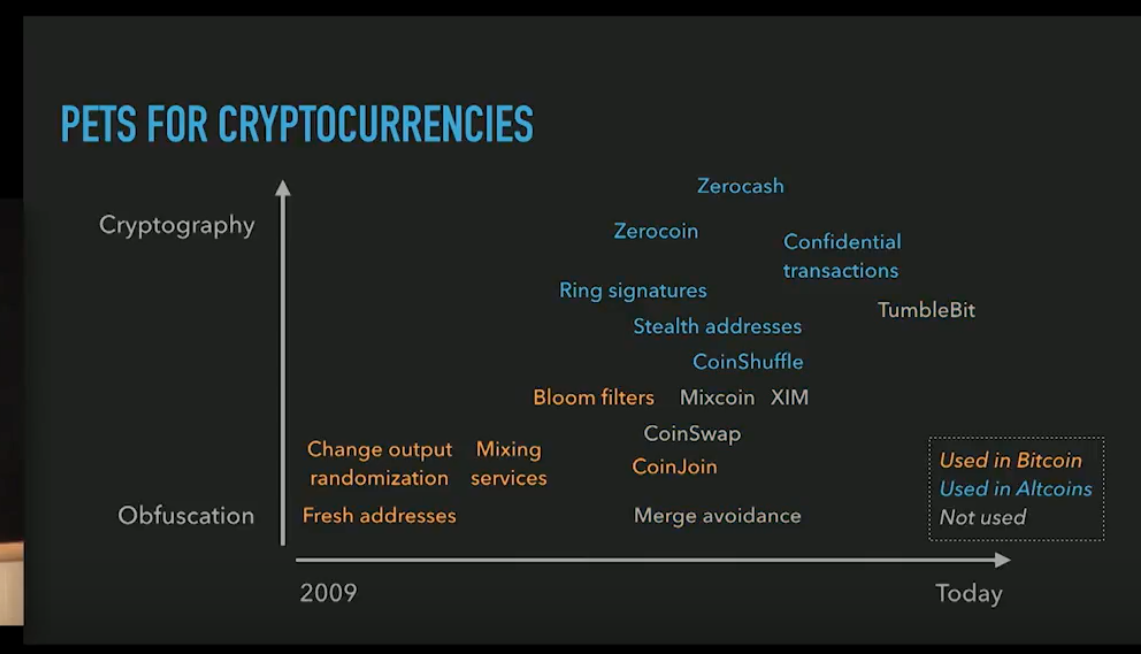 CryptoCurrency inherits the worst of:

Payment with BTC (“when cookies meets the blockchain” by Goldfeder et al):

q. 2 years back people were using miner-fees to do CoinJoin obfuscation. Thoughts? they would launder money through the fees.

q. analysis not including Exchanges. is there a formal way to include the influence of the exchanges?

q. lot of parameters may change from empirical analysis. Is there a criteria for how to select these parameters?

By Russell O’Connor, Blockstream. very readable Paper. Philip Wadler is a fan, with some valuable feedback. Last, you can also find an awesome implementation of Simplicity in haskell here.

A language for the consensus layer.

we have a choice: make one’s program so simple, there are obviously no errors. Or, make it so complex there are no obvious errors.

We want the former!

Simplicity in a Blockchain:

some reading for context on Schnorr Signatures in Bitcoin.

bitcoin currently uses ECDSA scheme. Seems like one could add new opcodes to bitcoin that accept schnorr instead of ECDSA.

Very similar to most of Satoshi’s paradigm. One deviation.

Blockchain with 10 blocks per second

BlockDAG is a paradigm not a solution, still need to resolve conflicts like double-spends

Satoshi first decided on longest chain and set throughput to lowest level that satisfies protocol. Phantom flips this on its head: set throughput and find k.

theorem: if attacker < 50%, then under any throughput, the largest k-cluster was created by honest nodes, …

To get around NP-Hard issue:

Phantom recognizes “blue set” (i.e. honest nodes) and instead of doing topological ordering, run “spectre” inside it and get fast confirmation time but lose linear ordering.

q. if throughput is high,

q. can one prune uncles from a year ago?

q. if topology, where some nodes are very isolated, can they be mistaken to be attacking, or will they get rolled in?

Talk 5: A new design for a Blockchain Virtual Machine

similar goals to Simplicity. But approach it from a solution-oriented, empirical versus formal, math approach.

Tx is the program:

q. model a tx with contract. Does that enable formal verification, compared to Solidity?

q. is there persistent store of memory like eth?

Talk 6: Beyond Hellman’s time-memory trade-offs with applications to proofs of space

goal: prover must convince the verifier that it is using N space.

Application 2: consensus from any Proof of Resource

In this work, we will be practical! square roots modulo a prime:

must need a cycle in topology to rebalance. a tree will not do.

q. what is the trust model for n-party payment model?

q. would have expected revive to be a series of rebalances, rather than offchain resolution